Building a Culture of Life - 63rd and 64th Ultrasounds

Prince of Peace Council #15337, Muskegon and George J. McCarthy Council #2975 have Taken Action in Building a Culture of Life through their initiatives to fund the installation of the 63rd and 64th MI KC sponsored ultrasound units.

The prayers and blessing of the Ultrasound were presided by Fr. Godfrey Onyekwere pastor of Prince of Peace Parish of Muskegon. State Warden Jim Kraus spoke on the importance of the ultrasound initiative and how we in Michigan can be proud that we have provided 63 of these units of the over 1,000 that have been donated throughout the order. 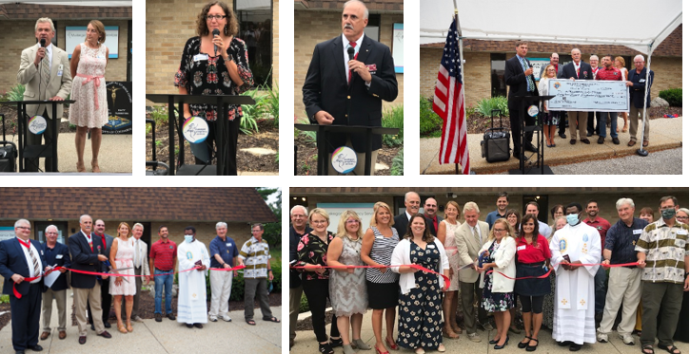 The opening prayers and thanks were presented by Fr. David Gross, pastor St. Mary Parish, Spring Lake. Fr. David’s prayer included that the “gifts of ultrasound will open the hearts and minds of life”.

Chris Irwin, Youth Minister at St. Mary’s, described the origins of this ultrasound on their return trip from the March for Life in Washington with the youth groups of St. Mary’s and St. Patrick’s (Grand Haven) parishes.

Other comments and thanks were given by Carloyn Doyle, Executive Director of Positive Options, Shelly Hollar Director Positive Options Grand Haven location, and State Family Director Garret Kelenske. State Deputy Walter Winkle spoke of how the ultrasound units are one of the swords we use in our battle against abortion in our communities.

A sincere thanks to the George J. McCarthy Council #2975 as lead council and other supporting councils for their initiatives to make this Ultrasound Initiative become a reality.

As we continue to Build a Culture of Life through the pathways of Prayer, Taking Action, Standing Up and Giving, let our councils and families give thanks to our Lord Jesus Christ for our actions.